ENCOUNTERING THE SHADOW – BRINGER OF THE LIGHT 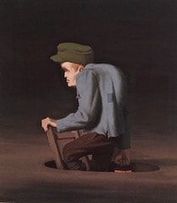 The 'ugliest man' (Nietsche) comes up from the sewers, hunchbacked and wretched. His face mirrors the sadness of a being which has never been loved, for we have turned away from our unconscious soul. But in folklore, a hunchback is a bringer of luck; he carries a lamp a chance to bring light into the darkness of our modern world."

One of C.G. Jung's most foundational psychological concepts concerns the Shadow, both at the personal as well as the deeper, collective level. He held that to encounter and accept our Shadow, "the thing we have no wish to be" (CW 16, §470), is fundamental to the process of individuation, to becoming whole.

If our Shadow, personal or collective is not recognized and accepted, it then acts out behind our back, so to speak; that despised quality that we reject as our own is unconsciously, and often destructively, projected onto the other. But if we risk the encounter we may find that the Shadow is not only negative, but holds hidden creative potential for human growth.

In this lecture we will investigate the concept of the shadow as bringer of the light. We will follow the analytical journey of a woman and her encounter with a striking shadow figure that accompanied her throughout much of her two year analysis. We witness her struggle to come to terms with this figure through an exploration of her dreams, her artwork and through the containment of the analytical process itself. We witness the healing and new creative life bestowed upon her, in part through her courageous encounter with the shadow.

Lost Voices of the Feminine
The song of Miriam Arises 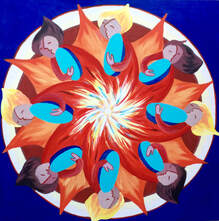 Joanne Thomson and Judith Dowling
The Song of Miriam lies buried beneath the story of the Hebrew Bible's Exodus. Miriam's Song appears fleetingly at a pinnacle moment of the Exodus story, after Moses has led the Hebrew Nation out of slavery in Egypt, through the parted waters of the Red sea and onto the new shore of freedom. Moses and the men sing a song of exaltation to YHVH for delivering them from slavery in Egypt (The Song at the Sea, Exod.15: 1-18), directly after which follows an often-missed verse, known as The Song of Miriam. Miriam leads all the people in ecstatic song, dance and drum (Exodus 15: 20-21)

To learn more about this captivating verse, we descend beneath the desert sands of Exodus. Through the agency of Midrash, Jewish legends and homilies that sprang up in the spaces between the words of biblical scripture, Miriam is revealed as a dominant figure in early biblical tradition, a prophet in her own right and leader in equal measure with her brothers. Unique to Miriam's leadership is her affiliation with song. The recovery of the lost voice of Miriam reunites feminine Eros to the masculine Logos of Exodus, bringing psychological insight into the essential role of the feminine principle for the individuation journey.

Judith's article under the above title is published in Jung Journal: Culture and Psyche. Spring 2018, Volume 12, Number 2. See "Publications" for link to article.

Previously given:
ISAP Zürich
March, 2017
Victoria Jung Society (Under the title:The Song of Miriam: From Death to Rebirth
Songlines of the Feminine on the Way to New Creation)
February, 2016
Comox Valley C.G. Jung Society
May, 2015